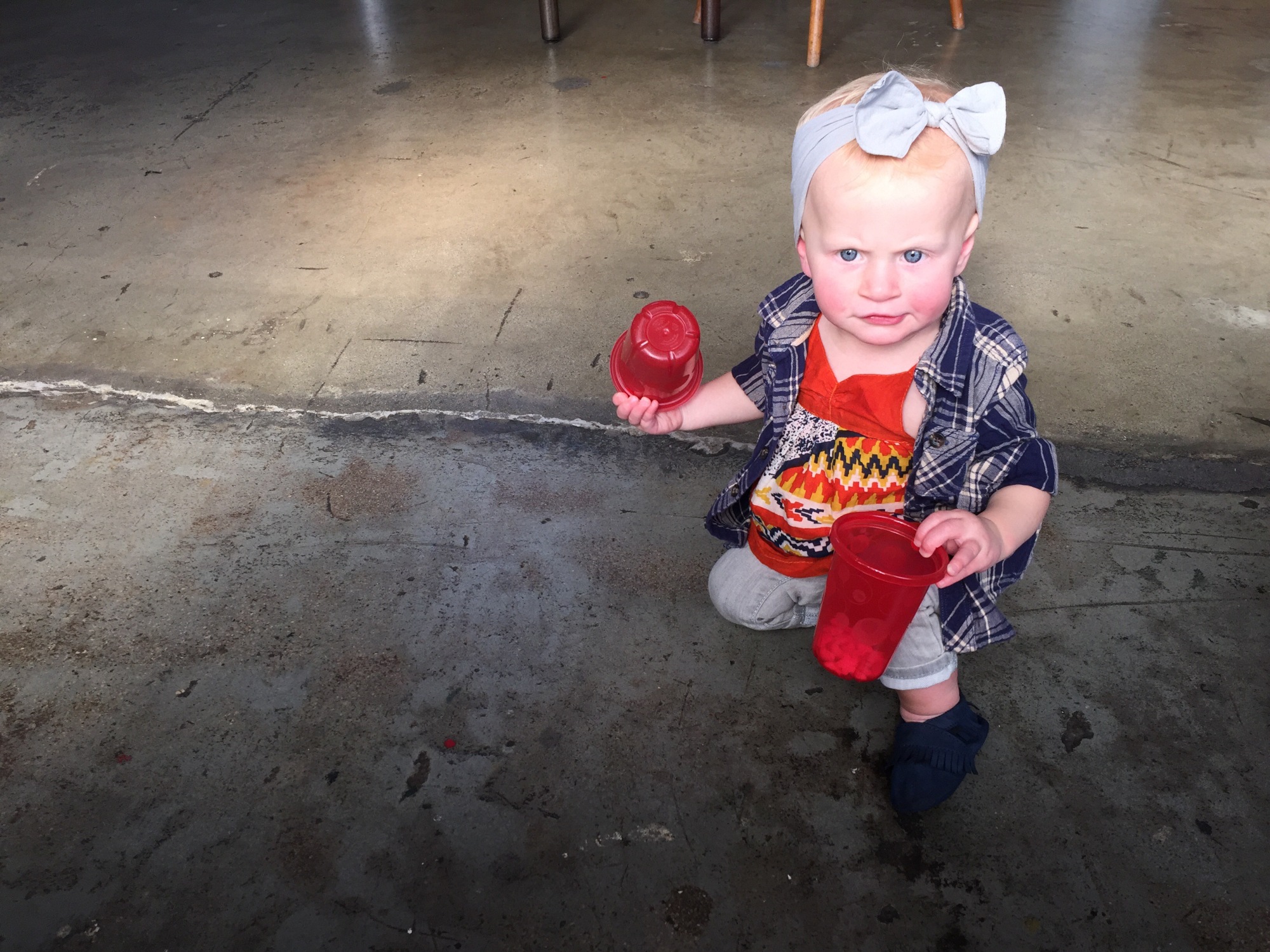 “Mommy’s hair all the way up,” he commanded. Then, with a smile at the sight of the familiar top knot, “That’s how I like it.”

It started innocently enough (because, doesn’t it always?) while nursing, with, “I want Mommy’s hair up, otherwise it might tickle me.”

To those of you thinking, A child old enough to articulate that he’d like his mother to put her hair up while nursing so that it doesn’t tickle him is too damn old to breastfeed, I will say that I was once one of you…and then I gave birth to actual, human children and realized that motherhood is where all of your proudly sworn “nevers” come back to haunt you. But, I digress…

The request seemed reasonable and I was happy to accommodate it. But before I knew it, the Bug was demanding that I put my hair up, not just when it might tickle him, but any time he could see me. He could be sitting at the counter eating his meal while I washed dishes, well out of reach, and it had to be up. If I forgot to put my hair up before going into his room in the morning, he would collapse into gut-wrenching hysterics and refuse to get out of his crib. Even with me out of sight, pushing the stroller from behind, he needed to know that my hair was up.

And I continued to oblige because I wasn’t sure what else to do.

Eventually, even in the car, he would panic if he saw me in his mirror with my hair down. Tears. Screams. Apparent agony. I didn’t know what to do. I suffer from migraines and often find it painful to have my hair up, dangerous even, while driving. If I tried to pull it into a loose, low pony instead to minimize the pressure, he would scream between sobs, “Mommy’s hair ALL THE WAY UP!”

And, so, because I felt like I was torturing him and because all accepted parenting wisdom says to “choose your battles” (because who cares if my vision is blurry and I’m feeling nauseous from the pressure of this rubber band?), I did it.

Somehow, the sweet relief of, “That’s how I like it,” (which he said every time) was enough to make me pretend this had anything to do with familiarity and connectedness instead of having everything to do with control. I would uncomfortably joke to friends, “He’s so used to seeing me look like a hot mess that he doesn’t recognize me with my hair down.” But the truth is, my friends all know that I have a lot of problems, but that looking like a hot mess is very seldom one of them.

And the deeper truth is that it terrified me to see how much power my hair had over him, how removing a rubber band could leave him feeling so completely unmoored.

How did we get here? I desperately wondered.

For crying out loud, I once famously said, “You want to throw your dinner on the floor. I do not want food on the floor, and it’s my house, so I decide.” Whether or not that was the gentlest, most respectful thing I’ve ever said to my son aside, nobody questioned who was the boss back in those days.

Somewhere, though, the train had come off the tracks. I have always encouraged him to make choices for himself and for his body, but here he was making a choice about my body. And it made us both uncomfortable.

I continued asking myself when I stopped being the decider, and then I started to hear it.

When I poured two sippy cups of milk at breakfast, “I decided have the red cup!” Babygirl have green cup!”

When I pulled two apples from the stroller at the park, “I decided have this one,” while frantically grabbing the apple of his choice.

When the three of us sat down to breastfeed, “I decided have this boobie!” (Again, refer to paragraph three with your judgment about tandem breastfeeding.)

When getting out of the bath, “I decided have that blue towel!”

One recurring piece of advice that I was given about the transition to two kids was to let the Bug make choices when the baby was involved. It would make him feel important or special…or something. It seemed harmless enough (because, again, it always does in the beginning). If she didn’t have a preference anyway, what could be wrong with pouring two cups of milk and asking him which one we should give his sister? But I realized, hearing him anxiously proclaim his decisions throughout the day, that my well-meant attempt to empower him had, instead, burdened him. It didn’t make him feel special to choose who got which cup; it made him feel like he was responsible, not just for himself, but for her. It was too much for him.

The desperate demands over my hair were his way of crying out to ask whether he had to be responsible for me too.

I knew I had to make a change. I needed him to know, again, that I was responsible for our family and that he didn’t have to carry the weight of those decisions. I braced myself for the worst and set out to be the decider again. When the Bug would say, “I decided have the red cup!” I would say, “It sounds like you are asking for the red cup,” or ,”Are you asking for the red cup?” An inconsequential thing to say, it might seem, if I still gave him the red cup, but it was enough to remind him, ever so gently, that I have the ability to say no.

Sometimes, he wouldn’t say anything as I poured but then, seeing me hand his sister a cup, would exclaim, “I wanted the blue cup!” In those instances, I calmly acknowledged, “You were hoping to have the blue cup. I can tell you’re disappointed that I gave it to Babygirl. Here is the green cup. Remind me you’d like the blue one at dinner.”

Occasionally, there were tears over cups and boobies, but more often than not, when I was comfortable with the limit, so was he.

And, faster than I ever could have imagined, we found our way back home. No less autonomous than he was before (and I might actually argue, more), he still makes choices – he decides how many broccoli trees he is going to eat, whether he would like to drink water or milk, whether he would like to play trucks or climb a tree when we’re at the park, and which books he would like to read with me while his sister naps – but he no longer carries the burden of being anyone else’s decider.

Thankfully for my migraines and my vanity, the Bug has given up caring how I wear my hair. At breakfast, though, he will occasionally say, with a sigh, when I hand him his milk, “I was hoping have the green cup. That’s a little bit disappointing” (and the cuteness almost kills me).