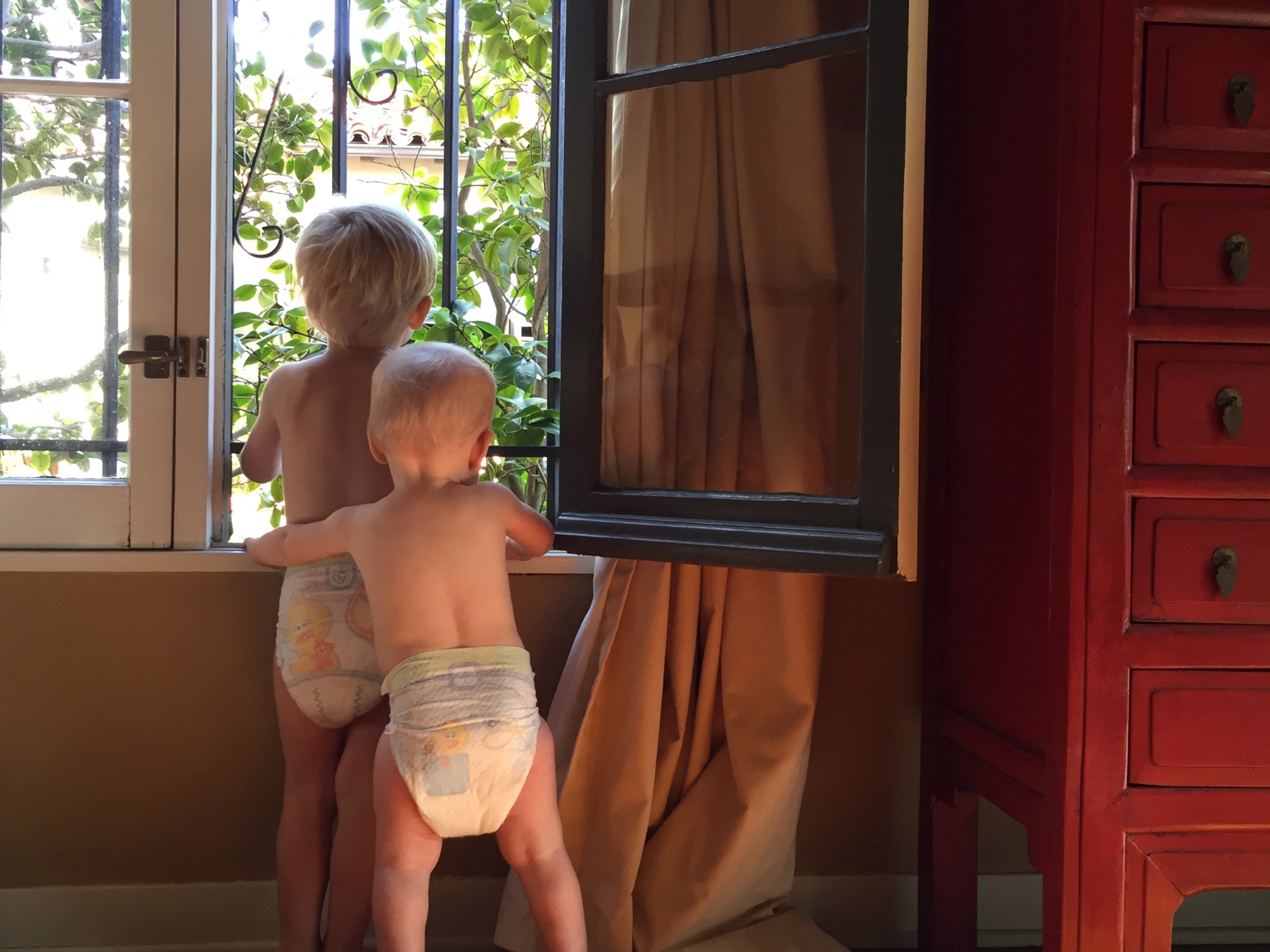 “He’s really sweet with her when he isn’t trying to kill her.”

It would have sounded like a joke if the memory of our own one-to-two transition weren’t still so fresh in my mind. But that’s exactly what those first months were: a roller coaster of tender moments and terrifying ones. (Basically just like the first time around, but instead of being worried you’ll accidentally kill the baby, you’re pretty sure your toddler will.)

“He’s not aggressive,” she clarified, worried of what I might be thinking.

“No,” I replied immediately and with understanding. “He’s curious.”

I told her that, in the beginning, the Bug had been absolutely convinced Babygirl’s limbs were detachable. He was sure that if he found just the right angle, those tiny arms and legs would come right off.

I considered telling her about the time I turned my back for 30 seconds to wash dishes only to turn back and find him trying to intubate her with a Baja Fresh straw, but I thought better of it.

Somehow, though, we all survived (and, on our good days, thrived). My last post dealt with how I helped the Bug adjust to our new family dynamic but, lest we mamas forget to take care of ourselves too, here are some of the things that helped ME:

Having a safe place to set the baby down

Forgive me if this is the most obvious advice anyone has ever given you, but it wasn’t obvious to me!

As a newborn, the Bug lived on a quilt on the floor when he wasn’t being held and it somehow never occurred to me that Babygirl wouldn’t have that same freedom (and, because it’s so painfully obvious, nobody thought to give me a heads up). But with a toddler now on the loose, plopping Babygirl down on the floor wasn’t an option unless I was sitting right there beside her.

With a second baby, you need that pack and play long before you’ve got a crawler on your hands! The sooner you have a safe place to set your newborn down where her well-meaning brother can’t give her a hug that involves laying completely on top of her or helping her get comfortable by bringing her a pillow (and putting it on top of her face), the sooner you’ll feel sane.

Seriously, though, “he’s really sweet with her when he isn’t trying to kill her.”

When the Bug was born, I wanted to be a Super Mom and do it all myself (#rookiemistake). Between the inability to relinquish control and the compulsion to prove I could handle motherhood, I turned down all sorts of help.

When the Bug was about a week old, my in-laws (who all live in town) drove over and brought brunch. When my mother-in-law mentioned that she would bring paper plates so I wouldn’t have to do dishes, I told her, as politely as I could, that I just couldn’t accept that motherhood meant I had to forgo proper dishes and silverware.

When the family came over to meet Babygirl, I asked my mother-in-law if she could please pack paper napkins too.

With two, I have a firm policy of accepting whatever help is offered. Help to the car with my groceries? You bet! All of the Thanksgiving leftovers? I hope you meant it because I’m already boxing them up.

My husband’s aunt emailed to ask if I needed any help with the Bug’s birthday party and I sent her a cupcake recipe (#notajoke).

This is the advice I most fervently give to first-time moms as well – even if it’s just for a walk around the block, seriously, GO! – and I found it even more necessary the second time. Staying cooped up at home didn’t just put me at risk of going stir-crazy; it nearly guaranteed a stir-crazy toddler as well. (Not a recipe for postpartum bliss, in my opinion.)

The Bug goes to bed at 6pm (#hallelujah #praiseJesus #allthehashtags) and, starting the day she came home from the hospital, so has Babygirl. While the logistics took a bit of troubleshooting, folding her into his bedtime made my life a million times easier because it meant that I knocked out both bedtimes at once AND preserved the evenings as adult time.

Early on, while I was still troubleshooting how to manage mother-of-two (spoiler alert: you don’t ever actually stop troubleshooting with two, you just move on to the next challenge), I thought it would be a great idea for us all to walk to the pet store. The Bug. The dog. And me, wearing Babygirl in the K’tan.

I’m sure you know where this is going.

The minute we left the pet store (now carrying a 10 pound bag of dog food in addition to the nine pound baby strapped to my chest) the Bug sat down in the middle of the parking lot and wouldn’t budge. I ended up carrying the Bug (and the baby, and the dog food) all the way home while, don’t forget, also trying to manage an erratic terrier on the retractable leash the my husband thought was such a great idea.

After that fiasco, I made a point of bringing the stroller everywhere. Even when I didn’t use it, pushing the stroller was worth the peace of mind that I had an escape plan if things went awry.

Side note: Having the stroller was also valuable because the Bug knew I had a way of enforcing the limits I set while we were out. If he couldn’t stay beside me, the stroller made it easy to keep him there in a respectful and (typically) spectacle-free fashion. Without the stroller, I was pretty much at his mercy, which wasn’t healthy for either of us.

I’m a big time believer in independent play (yes, even for newborns), but giving myself pemission to allow it was so much harder the second time around. Mom guilt is ugly and real. I felt guilty that Babygirl would never have the experience her brother had of being our only. That unrelenting guilt that she would always be “and Babygirl” made me question myself every time I laid her down in her cradle to chew on her feet while I took a shower or in the pack and play to smile out the window while I prepared dinner. She was a remarkably easygoing newborn (I paid my dues with her brother), so she rarely protested, but the question nagged anyway while she laid there happily, There’s already so little to go around, shouldn’t I be giving her EVERY BIT of attention I can? 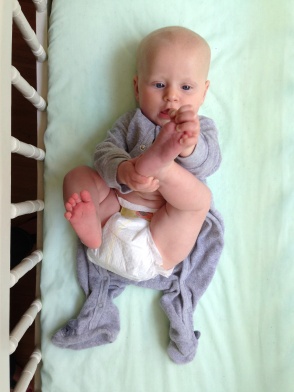 At about a month old, she started putting herself to sleep for naps in the middle of the living room (with no fuss at all and often while her brother bounced off the walls like a racquetball). Something that most mothers dream of but, instead (#momguilt), sent me into a tailspin of anxiety and self-doubt. Oh my God, I thought, she’s completely given up on human interaction. (As if I weren’t nursing her on demand a million times a day, wearing her against my body in a carrier on outings, speaking to her like a person, and filling her up with smiles and giggles when we dressed, diapered, read, and played.) She must be so under-stimulated that she’s just shutting down and giving up! (Never mind that she was due to nap and that it is basically impossible to under-stimulate a newborn, for whom the entire world is new and, most of it, overwhelming.)

But somehow, my faith in what the principles of RIE had done for my son gave me the confidence (or at least the will) to quiet those doubts and trust my baby. She will let me know when she needs me, I reminded myself when the guilt crept in, and continued offering her opportunities for independent play.

And thank goodness I did, because, not only is it wonderful for my daughter that she can entertain herself and enjoy her own company, it’s fairly wonderful for me as well. It was such a gift to be able steal moments of one-on-one time with the Bug in those early days, reading a book or playing together while his sister explored on her own.

I say this knowing that some babies (like my first) can’t be bothered with this stage, but Babygirl was the textbook sleepy newborn – the one who will nap in the stroller at a restaurant or in your arms at the park – and, boy, did I make it count! I snuggled that baby up in the K’tan and we headed out the front door, ready for action!

The day that Babygirl turned a week old, I took the kids to the zoo. When we got there, I nursed her in the car, swaddled her, and put her in the stroller bassinet. She slept for three hours while the Bug and I explored, watched the animals, and had lunch (almost) like she wasn’t even there. 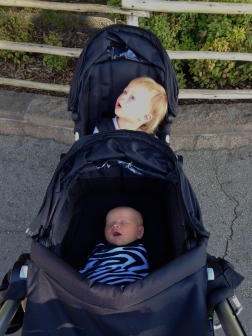 one week old, at the zoo (asleep)

That newborn stage was such a blessing because it allowed me to (1) keep things pretty normal for the Bug, who was used to a steady rotation of park, zoo, aquarium, nature walk and (2) work through the logistics of getting out with both kids while Babygirl’s needs were still relatively simple (snuggles and boob). By the time she “woke up” to the world a bit more, I had gained confidence in my ability to navigate outings with both kids and was ready to meet her increased need for my attention without feeling frazzled or overwhelmed.

Cutting myself some slack

A lot of people joke that parents let a little more slide with each subsequent child, and it’s basically true. The second time around, you just don’t have time to worry about every single thing. You don’t have time to be a damn hero. You just do as much as you can and try to trust that “good enough” actually is.

In line with my RIE-leanings, I am pretty anti-container. I don’t have an exersaucer or a jumper. My kids didn’t sit until they sat. You get the idea.

But, can I tell you a secret?

On many a morning, Babygirl took a swing nap while the Bug and I ate breakfast. It wasn’t something that I planned, but she was often ready for her first nap right when we came downstairs and putting her in the swing to nap allowed me to make breakfast with two hands and then to sit at the table and eat with the Bug. It was just too many wins to pass up.

And you know what? She rolled at three months, crawled at six, and was running by thirteen. Exactly like her brother, whose first-time-mother still had the energy to do everything “right.”

Now that I think about it, starting out with the knowledge that there is no “right” is probably what made being a second time parent so much easier. The first time around, there is still this illusion that babies will do x if only you do y, that there are actually solutions to things that don’t rely completely on trial and error. As a second time mom, you already know there is no formula and that, in spite of it, you still learned your baby and found what worked. In those moments when you have no clue what you’re doing, there is a hazy recollection that you had no idea what you were doing last time either and, somehow, you figured it out. So you take a deep breath and you trust that you’ll figure it out again.

And you will. I promise.

TWO UNDER TWO, part one: the fears

2 thoughts on “TWO UNDER TWO, part three: making it work”